Fatberg the size of a small bungalow removed from London sewer 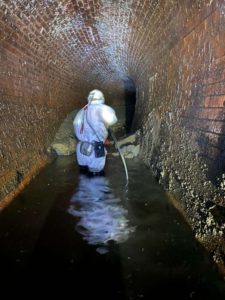 A fatberg  with the weight of a small bungalow has been removed from a London sewer.

It took two weeks to shift the “huge disgusting” mass from a conduit in Canary Wharf.

High pressure water jets and hand tools were used to flush and chip away at the berg.

The work was done by engineers from Thames Water and MTS Cleaning Services.

“This was a huge, disgusting fatberg that took a great deal of brute force and teamwork to clear.

“Our brilliant engineers were able to clear the huge blockage before it caused serious problems, negotiating tricky and cramped working conditions along the way.

“We’d ask everyone to help fight the fatberg by only flushing the 3Ps – pee, poo and paper – as well as disposing of fat and oils in the bin, not the sink.”

“MTS worked tirelessly from the planning stage to completion alongside Thames Water and we’re delighted with the result.”

Fatbergs are made when oil, grease and fat poured down drains combine with non-biodegradable items such as wet wipes, nappies and cotton buds.

India vs England: Joe Root's side in desperate need of quick wickets on day two

Tokyo 2020 Olympics: Over 1,000 volunteers QUIT due to coronavirus concerns