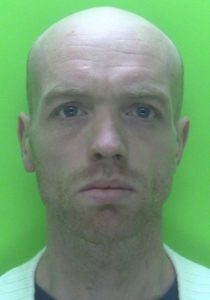 A 77-year-old woman bravely fought a mugger with her crutches when he snatched her bag.

The robber rode up to the pensioner on his bike before yanking the bag from her shoulder.

She tried in vain to stop Jason Sheldon, 31, shouting and hitting him repeatedly with one of her crutches.

But he proved too strong and escaped on his bike.

Sheldon, of Tolney Lane, Newark, managed to ride off towards Balderton Gate.

The woman, who had been on crutches following a knee replacement, suffered pain to her side during the struggle.

He was unlocking his front door when Sheldon knocked him to the floor.

Sheldon demanded the money and kept punching him.

The man foiled the robbery by pushing the money under his front door and Sheldon cycled off.

The victim suffered concussion and a black eye.

Sheldon was arrested and charged with robbery and attempted robbery.

He was sentenced to six years in prison at Nottingham Crown Court.

“To attack an elderly and vulnerable woman on crutches in this way is absolutely despicable.

“When the incident was reported and we saw the video footage we were shocked at how someone could do something like this and we were determined to bring him to justice.

“I’d like to commend the bravery shown by both victims, not only during these appalling crimes but also during our investigations into them.

“These were callous attacks and Sheldon showed a complete disregard to the victim’s welfare.

“It’s fortunate that they didn’t suffer even more serious injuries.

“I hope this conviction and sentencing will serve as a warning to others. We want people to feel safe on our streets and I want to reassure people that Nottinghamshire Police takes robbery extremely seriously and will take every step to bring offenders such as Sheldon to justice.”

Are Leicester going to collapse and miss out on the Champions League again?

Is this the UK's nuttiest place to stay? The incredible copper-clad 'Conker' glamping pod in Wales