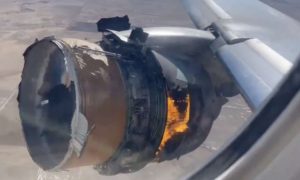 All Boeing 777 planes with the same engine which caught fire will be banned from entering UK airspace.

The 777 scattered engine debris over an American city after it blew up.

It had taken off from Denver International Airport.

Boeing has recommended all 777s with the Pratt & Whitney 4000-112 series engine should be grounded.

“After issues this weekend, Boeing B777s with Pratt & Whitney 4000-112 series engines will be temporarily banned from entering the UK airspace.

“I will continue to work closely with the UK CAA to monitor the situation’.

The UK Civil Aviation Authority said the engine was not used on planes flown by UK airlines.

“After the Pratt & Whitney 4000-112 engine incident on a Boeing 777 aircraft, we have suspended this configuration’s use in UK airspace.

“It is not used by any UK airlines.

“It is operated by airlines in the USA, Japan and South Korea where authorities have also stopped its use.”