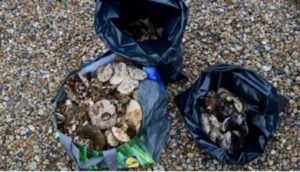 More than 25 people have been fined for picking wild mushrooms in Epping Forest.

Some illegal pickers were found with bags stuffed with more than five kilos of various mushrooms.

One person had picked 49 kilograms.

The fungi – a source of food for forest animals – is sold to restaurants and markets.

The fungi are protected under Epping Forest bylaws.

The  area in Essex is considered a “Site of Special Scientific Interest” and a “Special Area of Conservation”.

Graeme Doshi-Smith, Chairman of the Epping Forest and Commons Committee, said in a statement:

“Fungi are vital to the health of the site’s ancient trees, some of which are up to 1,000 years old, as particular species protect their roots, and provide them with water and vital minerals.

“Stripping the ancient woodland of mushrooms damages its wildlife and threatens rare species.

“Many varieties of mushrooms are dangerous for human consumption and can indeed be fatal.

“We welcome the millions of people who come to enjoy this protected site, but we urge visitors to leave the fungi how they find them – untouched.”