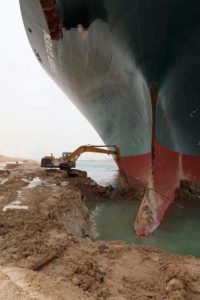 The backlog of ships waiting to pass through the Suez Canal has been cleared.

More than 420 vessels were held up when the container ship Ever Given blocked the waterway for six days.

The grounding at both its bow and stern brought chaos to international trade.

It was estimated the closed canal was costing £6 billion a day in lost business.

A Herculean effort by a salvage company, diggers, and tug boats – plus a high tide – managed to dislodge the stuck Panamanian flagged ship.

An investigation has started to see what caused the costly incident.

High winds and a sand storm were blamed at first.

But there is now a belief it could have been pilot error.

“The investigation is going well and will take two more days, then we will announce the results.”

The conclusion will have severe financial repercussions as various parties try to recoup their losses.

The SCA wants £720 million in compensation for the losses resulting from the blockage.

Osama Rabie said the Ever Given would not leave the Great Bitter Lake, where it is being held, until the compensation was paid by the vessel’s owner.

Mr Rabie also said that about 800 people had helped to free the ship and said they would be rewarded for their “great efforts”.