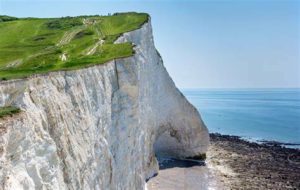 A base jumper is in hospital after their parachute failed to open in a jump off Beachy Head.

The sky diver was rescued by the Coastguard and RNLI and winched to safety aboard a helicopter.

“A 999 call was received at 9.15am today reporting an injured person at Beachy Head.

“The Coastguard rescue teams from Eastbourne, Birling Gap and Newhaven, the RNLI lifeboat from Eastbourne, the search and rescue helicopter from Lydd and the South East Coast Ambulance Service attended the scene.

“The casualty was winched by the search and rescue helicopter and airlifted to Brighton Hospital where they were passed into the care of medical staff.”

It’s reported the jumper’s chute did not fully open during the 530 ft leap from the Sussex coastline ridge.

Coronavirus doctor's diary: How the virus has changed our sleep patterns

Pit bull dogs that killed great-grandmother are put down