Pit bull dogs that killed great-grandmother are put down 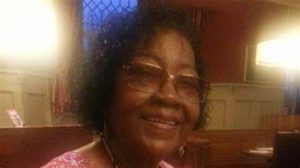 Two pitbull type dogs have been put down after they attacked and killed an 85-year-old great- grandmother.

“The ownership of the dogs was voluntarily transferred to police.

“Following specialist advice, it was established the dogs could never be rehomed due to the violent act and should be humanely destroyed.

“This has happened although further analysis will take place to determine what breed they were.”

A 43-year-old man was arrested on suspicion of being in charge of a dog dangerously out of control.

He has been bailed pending further police enquiries.

Lucille Downer suffered fatal injuries and was pronounced dead at the scene after the two dogs managed to get through a hole in the fence into her garden in Rowley Regis, Birmingham, West Midlands.

Both dogs were tranquillised and taken to a secure facility to await DNA testing before being put down.

“Lucille was a mother, grandmother and great-grandmother who spent her working years as a cook at Bromford House Care Home in West Bromwich.

“Lucille was born in Jamaica and emigrated to the UK in her early 20s. Since arriving in the UK, Rowley Regis has always been her home and her family will miss her dearly.”

“Neighbours called to report that a woman, 85 years of age, was under attack from dogs from a neighbouring property.

“Our officers attended, by which point the dogs had returned through a hole in the fence to the adjacent property and then, unfortunately, despite the best efforts of medical professionals, that lady died at the scene.

“An operation was then under way to secure the dogs. They were tranquilised and transported subsequently to secure kennels where they currently remain, and they are being tested to determine their breed.

“Fortunately, these types of incidents are rare. This presented no wider threat to the public. It was a hole in adjacent premises, so they weren’t running in the streets.

“It was contained and the male who owned those dogs was arrested yesterday.

European Super League: Karl-Heinz Rummenigge has been asked to act as a mediator