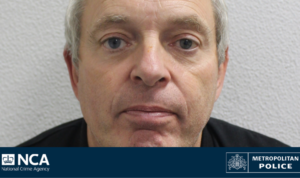 An upholsterer found himself well and truly stuffed when police flagged down his van on the M25.

A look in the back revealed two brown leather chairs.

Driver Andrew Fraser, 58, said he’d just collected them and planned to upholster them both.

But the police sniffer dogs told a different a story.

They were quickly drawn to the chairs – leading officers to find two shopping bags holding 20 kilos of cocaine.

Fraser, from Harlow in Essex,  pleaded guilty at Croydon Crown Court to possession with intent to supply and was jailed for nine years.

He had previous convictions for supplying the Class A drug and cannabis resin.

He also had an encrypted app on his mobile phone used by criminals.

Tests on the cocaine revealed a purity of 86%.

“Andrew Fraser was handling a huge volume of cocaine, which when sold would have had terrible knock-on effects on London’s communities.

“The OCP works to stop the movement of illegal drugs by criminals who profit from their trade and in doing so, put the public at risk of serious harm.”

The OCP worked with the National Crime Agency and the Metropolitan Police to catch Fraser.

Sir Tom Jones “all shook up” after Elvis advice

Air pollution: 'All children have the right to breathe clean air'