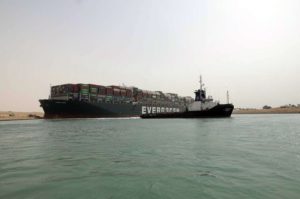 Suez Canal authorities are hoping to negotiate a financial settlement with the owners of the container ship Ever Given which blocked the waterway for six days.

Lieutenant General Osama Rabie wants talks to be concluded with the ship’s owners without legal action.

He said: “We are discussing with them a peaceful resolution to the matter without resorting to the judiciary.”

He said bringing the claim to court would be damaging for Shoei Kisen Kaisha Ltd.

The Suez Canal Authority is looking for £700 million in compensation.

The Ever Given would not be allowed to leave a holding area if the claims turned into a legal dispute.

So far, it’s not known why the vessel ran aground with its bow and stern firmly wedged in the canal’s sides.