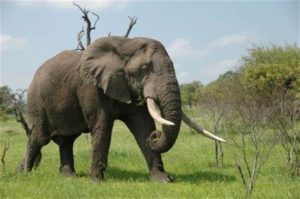 A poacher has been trampled to death by a herd in the Kruger National Park.

One was captured and another escaped.

But the third ran into a herd of elephants.

His body was found later.

The three men were thought to be hunting rhinos for their horns.

Rangers discovered an axe and a rifle.

“The campaign against poaching is the responsibility of all of us.

“It threatens many livelihoods, destroys families, and takes much-needed resources to fight crime, which could be used for creating jobs and development.”