Plans to reintroduce European wild cats back to the English countryside 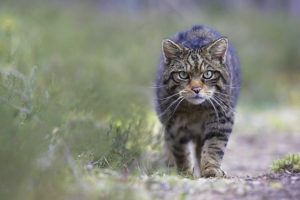 A conservation group hopes to reintroduce the European wild cat to the countryside.

The species is already on the edge of extinction and is only found in the Scottish Highlands.

The wild cat is Britain’s rarest mammal last seen in England more than 200 years ago.

“Our goal is to return a viable and self-sustaining wildcat population to its former range.

“As a leading British wildlife conservation charity, we have developed years of experience and expertise in breeding wildcats in support of the existing Scottish conservation project.

“We are now excited to be utilising these skills to benefit wildcat recovery more broadly across Britain.”

Each will house a pair of breeding cats, who usually mate between January and March, before their litters, born in April or May, are later released into the wild.

Post-lockdown plans: The top 30 things Britons are most excited to see again soon