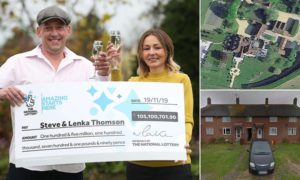 A couple who won £105 million on the lottery has finally moved to a new house.

But the couple carried on living in their modest three-bedroomed house in Selsey, West Sussex.

Now Steve and Lenka have splashed out a “modest” £4.5 million estate.

The farmhouse in Kent has five reception rooms, two kitchens, six bedrooms, a swimming pool and a “party room”.

It’s set within 14.5 acres of land, including a lake, a pond, tennis court and stables.

However, Steve still has a lot of work to do on the property – and he’ll be doing it himself.

Steve said: “The kids have finally got their own bedrooms.

“It’s a simple thing but it was all they ever wished for.

“I still haven’t got over what happened to us and am honestly still trying to process it.

“We are very lucky to be in this place but there’s a lot of work that needs doing, so I’ll be focusing on that for the time being.”.

Remembering the big win, he said:

“I am not sure I even looked at the first two lines, the third one just jumped out and I could instantly tell they all matched.

“I started shaking a lot.

“I knew it was a really big win but didn’t know what to do.

“I went out to my van, walked back in, thought about knocking on a neighbour’s door, went back to the van – I think I was on the verge of having a heart attack.”