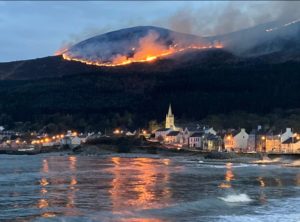 A huge wildfire has engulfed the Mourne Mountains in Northern Ireland.

More than 70 fire fighters and a dozen appliances have been sent to battle the blaze on the country’s highest peak, Slieve Donard.

It’s thought the fire might have been started deliberately.

Teams are struggling to hold the inferno because of the difficult terrain.

It’s hard to play water across the seat of the fire and teams are handling heat and exhaustion.

Wildlife is also being seriously compromised by the fire.

“It’s incredible the damage that’s being done here. Our wildlife has been seriously impacted.

“It’s a very, very large area… we’re still measuring the exact size of it… but at present, there will be a large impact on the environment and eco-systems in this area.”

It’s been one of the driest Aprils on record and experts believe the fire was started deliberately.

“My experience over many years in the Fire and Rescue Service is that very few of these fires start outside human activity so my expectation is we will find this was a deliberate fire.”

“I would appeal to the public, landowners and all, to work with us to prevent that.”