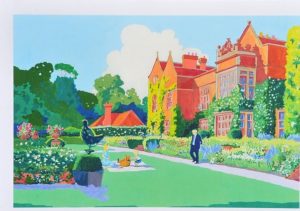 Prime Minister Boris Johnson has bought a picture of his official country residence Chequers from an amateur artist.

Mary Casserley, 54, painted the scene in the style of a pre-war railway poster at her kitchen table.

She sent a copy to the PM “on a whim” and he replied that he’d like to buy the original.

“I don’t normally sell originals, but I do some commissions for £425.

The picture – called Chequers Court – shows Mr Johnson walking the dog Dilyn towards his fiancée Carrie Symonds and their son Wilfred having a picnic on the lawn.

Despite the quick response to Ms Casserley things went “silent”.

She chased up his office and payment was made promptly.

Game of Thrones: House Of The Dragon production begins with cast table read