Jonathan Gibson – aged 24 – is youngest ever winner of Mastermind 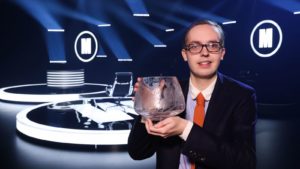 Jonathan from Glasgow scored a perfect 11/11 in his specialist subject on the comedy duo Flanders and Swann.

He then romped his way through the general knowledge questions – often desperate to answer before quizmaster John Humphrys had finished asking.

He will be replaced by BBC presenter Clive Myrie.