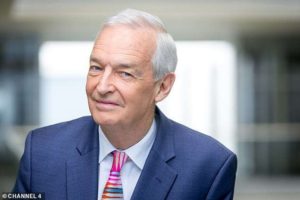 Channel 4 News presenter will quit at the end of this year after 32 years with the programme.

The 73-year-old journalist has spent 45 years at ITN.

He will continue to work for the broadcaster on special projects.

“After three incredible decades on Channel 4 News, it is time to move on.

“I am excited by the many things I want to accomplish but I have to say I have enjoyed every minute of my time with the programme.

“It has brought me adventure, as well as sorrow in some of the stories that I have had to report and also joy in reporting others, but above all, it has brought me community in working with the most fantastic group of people who are bound in intellect, humour and understanding.

“Together, we have forged a wonderful service. I feel proud to have contributed to Channel 4 News let alone to have anchored the programme for the last 32 years.

“Jon has been the driving force behind Channel 4 News for the last 30 years.

“His fearless journalism, inherent compassion, a nose for a good story as well as sympathy for the underdog have been powered by relentless energy, charm and a mischievous sense of fun.”

“There is only one Jon Snow – when they made him, they broke the mould.

“His warmth, intellect and decency have always prevailed, even as he held the powerful to account and sought justice for the weak and powerless.”