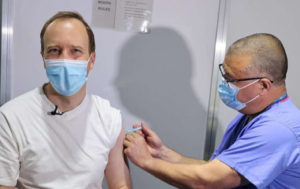 The minister was given the Oxford AstraZeneca vaccine at London’s Science Museum.

“Didn’t hurt at all.

“Massive thanks to JVT & the science museum team.

“When you get the call, get the jab!”

He added later in a statement:

“More than 47 million doses have now been administered across the country thanks not only to hundreds of hospitals, GP clinics and pharmacies, but to incredible sites like this that have volunteered their unused spaces.

“The rollout continues at pace and we are on track to reach our target of offering all adults a first dose of the vaccine by the end of July.

“I was very excited when my call came, and I’d urge everyone to take up the offer when it comes and become part of history in the UK’s biggest ever vaccination programme.”

How Mr Hancock came to be jabbed by Prof Van-Tam is not known.

“I think a number of people have been lucky enough to be vaccinated by Professor Van-Tam.

“He does fairly regular shifts in and around the country, and so a number of people had it done (by him).

“I think he was doing a shift when the Health Secretary was vaccinated.”