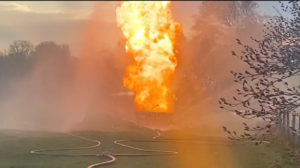 A lawyer working in his garden uncovered two crates lying buried for more than 70 years.

James Osborne thought they held bottles – until they started smoking.

The father of three called the police and within minutes his home in Hampshire was sealed off.

James said: “Initially, we didn’t realise how significant it was.

“We were lifting them out and putting them on the side and thought we could carry on with the work.

“But a couple of them were smoking so we thought it best to call the police and then we had the fire brigade, about five or six ambulances all preparing for a controlled explosion.”

The phosphorus grenades were gently placed in a skip surrounded by a wall of water.

Then a bomb disposal team detonated the cache.

It’s thought the grenades were given out to the local Dad’s Army in case the Germans attacked.

“In all, just over 45 of the phosphorous grenades around the size of a milk bottle were located in the garden on Petersfield Road.

“They have now been disposed of.

“No one was hurt in the incident.”

Mr Osborne said his children found it all “very exciting” – but the air was filled with the “smell of rotten eggs”.

Line of Duty finale: 'H' actor reacts to their unmasking