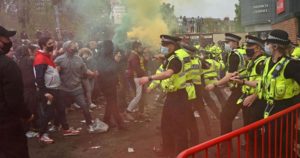 The Premier League game between Manchester United and Liverpool was postponed after a pitch invasion and running battles at Old Trafford.

United fans were protesting the club’s owners and a recent ill-judged foray into joining a European Super League.

Hundreds of protesters swarmed on the pitch – quickly joined by others who’d broken into the stadium.

And, outside flares were let off and bottles thrown at the police.

One officer had his face slashed with a broken bottle.

United staff were forced to lock themselves in rooms as the protesters ran riot.

They were escorted to safety by the police.

At 17.30 United confirmed the match had been called off and would be rescheduled.

“Officers were aware of a protest planned to take place in Old Trafford today (Sunday 2 May) and were working closely alongside partners to ensure those that attended were kept safe whilst enabling their right to peaceful protest.

“Early this afternoon, groups of protestors began to gather at Old Trafford and separately at The Lowry Hotel, Salford where the United players were staying.

“By late afternoon around 200 protestors had gathered outside the Lowry and over 1,000 at Old Trafford.

“Officers continued to closely monitor the situation, engaging with those present but as the groups grew in size; it became clear that many of those present were not intending to exercise their right to peaceful protest.

“Flares were let off and bottles thrown at officers.

“Protestors outside Old Trafford became especially aggressive and antagonistic towards police before a group of about 100 forced entry to the ground with some United staff having to lock themselves in rooms.

“Those in the stadium were evicted by officers but outside on the forecourt hostility grew with bottles and barriers being thrown at officers and horses.

“Two officers have been injured with one officer being attacked with a bottle and sustaining a significant slash wound to his face, requiring emergency hospital treatment.

“Following discussion with The Premier League, Trafford Council and the clubs, a joint decision was made to postpone the match for safety reasons.”