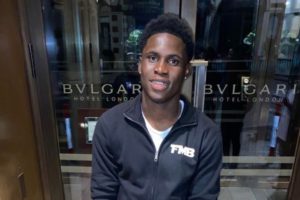 A man who died trying to rescue a drowning woman from the River Thames should be awarded a medal for bravery.

The call for recognition comes from a fellow rescuer who also dived into the dark cold waters from London Bridge.

Joaquin Garcia – along with the woman – was plucked to safety by the coastguard.

There is a campaign for him to be awarded The George Cross; a recognition “for acts of the greatest heroism or for most conspicuous courage in circumstance of extreme danger”

“I back the campaign for Jimi to take a medal for his honour and his braveness.

“I think he deserves that.

“I think it would be really good for the family as well.”

Mr Garcia said he was walking across the bridge when he heard Mr Folajimi Olubunmi-Adewol – known as Jimi – shouting “she’s there, she’s there”.

Mr Garcia said he asked Jimi if he was going to jump in and he replied “yes”.

“Jimi started to count and said, ‘let’s do it’.

“I couldn’t think on it, so I just jumped… and that’s the last time I saw Jimi.”

The City of London Police have asked the Royal Humane Society to put Mr Olubunmi-Adewol forward for an award for his “bravery and selfless actions”.

And more than 150,000 have signed an online petition for a plaque to be put on London Bridge to recognise his selfless bravery.