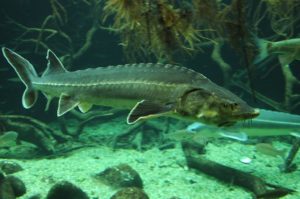 The mighty sturgeon – once caught for its caviar – could be returning to British waters after an absence of 200 years.

The European Sturgeon is critically endangered.

It can live to be more than 100 years old and reaches sexual maturity in its later life – making them vulnerable to over-fishing.

Its last breeding ground is in the Garonne river basin in France.

Two centuries ago, it could be found in the major rivers of the UK – the Severn, Avon, Ouse and Thames.

However, a programme of building weirs prevented the fish from travelling to breed.

Its eggs were also highly prized as a delicacy.

The Blue Marine Foundation and the Zoological Society of London hope to release the fish in the River Severn.

“There is a known ecological link or symbiosis between European sturgeon and the endangered giant freshwater pearl mussel (also a river cleaner).

“The mussel larvae attach to the gills of sturgeon as part of their life-cycle.

“As omnivorous scavengers, sturgeon remove decaying organic matter from estuaries and feed on worms and crustaceans in the mud.

“It is highly likely that many other species would benefit from sturgeon reintroduction, including all migratory fish (salmon, trout, lamprey, eels, shad) as barriers such as weirs are removed or bypassed.”

‘Going out’ gear out and athleisure in for Boohoo