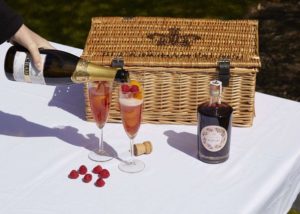 Buckingham Palace has added sloe gin to its growing list of drinks for sale.

The addition follows the success of its London Dry Gin launched last summer.

The Royal Collection Trust (RCT) even suggested a cocktail for the new gin – the “Sloe Royale”.

“Pour a 25ml measure of Buckingham Palace Sloe Gin into a fluted glass, top up with champagne or sparkling wine and garnish with fresh berries or orange peel.”

The gin is made with hand-picked sloes and added to Buckingham Palace Gin – itself infused with botanicals from the Palace garden..

It is described as:

“The red fruits and notes of cloves and kirsch spices deliver a clean and medium aroma intensity on the nose.

“The plums and cranberries create a light ruby colour and combined with marzipan, it serves a medium sweet flavour with added bitterness from the citrus fruits and followed by the juniper and ginger spices.”

All profits from sales of the sloe gin go to the RCT to help fund the care and conservation of the Royal Collection.

Former paratroopers A and C cleared of murdering IRA commander