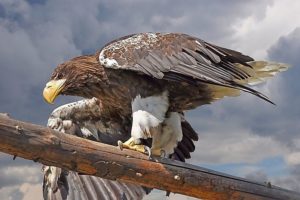 White-tailed eagles are to be reintroduced to try to bring the birds back to England.

The eagles – known as the “flying barndoor” – has a wing span of eight feet.

It was Britain’s biggest bird of prey until it became extinct after relentless persecution.

Now, Natural England has agreed to a ten-year scheme in Norfolk where up to 60 juvenile birds will be released at Wild Ken Hill farm.

The young birds will come from a healthy population in Poland.

“We are delighted to have the go-ahead to bring back white-tailed eagles to eastern England and overwhelmed by the support we have received from all sectors.

“We have also carefully been listening to concerns where they have arisen, and we are now committed to delivering this important conservation project and working with all of our stakeholders to ensure its success.”

The white-tailed eagle was reintroduced to Scotland in the 1970s.

Another scheme saw them brought back to the Isle of Wight in 2019.

There were past concerns about the birds taking lambs.

“Our experts have carefully assessed the project against guidelines for the reintroduction of species, as well as the potential environmental, social and economic impacts.

“And we are satisfied that there are no significant risks associated with it.

“We’re content that the applicants’ experience, as well as our expertise and licensing process, ensures the project will be carried out in a responsible, well-managed way that takes account of concerns and makes a positive contribution to both people and wildlife.”