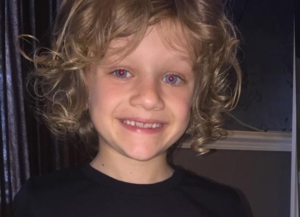 The family of a nine-year-old boy killed by lightning have said “he was our everything”.

Jordan Banks was struck while playing football on a pitch in Blackpool, Lancashire.

He was taken to hospital but later died.

In a statement his family said:

“We lost the brightest star our beautiful boy Jordan.

“His laugh, that infectious smile, golden curls, he was our everything.

“Wise beyond his years, caring, considerate, generous and so loving. Our love is endless. Goodnight beautiful boy.

“We thank you all for your kind words and support but as a family ask that you respect our wishes and privacy.”

Blackpool Tower was lit up in red for Jordan – a Liverpool FC fan.

“The thoughts of everybody at Liverpool Football Club are with Jordan’s family and friends.

“It is with great sadness and a very heavy heart we announce that the tragic incident yesterday involved one of our own players.

“Jordan of our U9 Bees tragically passed away yesterday evening doing what he loved.

“Jordan was a shining light and an inspiration to everyone that he met.

“A strong, determined and courageous young man, who will be missed by everyone.

“The world has truly lost an extraordinary young man, who had done so much good in his community.”