Rings worth £14,000 disappear from woman’s hand after she dies in hospital 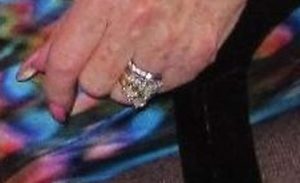 An engagement ring and wedding ring were stolen from an elderly woman after she died in hospital.

They were taken from the hand of a lady in her 80s after she was admitted to hospital following a fall.

She died later at the Princess Alexandra Hospital in Harlow, Essex, with her husband by her side.

When he returned three days later to pick up her personal belongings the rings were missing.

Essex police said the rings were on her hand when she was admitted and were not removed during treatment.

“These two rings are very special to the husband as they were both engagement and wedding rings and were bought for her in America.

“The total combined value of both these rings was 19,000 US dollars, which equates to approximately £13,500.

“The husband is, of course, incredibly distressed and upset by this.

“We are looking to speak to anyone who might have any information on the whereabouts of these rings or if anyone has attempted to sell them on.”

“We offer our deepest condolences on the family’s loss and we are extremely concerned regarding this distressing incident.

“We are supporting Essex Police with their investigation and encourage anyone with information to contact them.”

A night on the cobbles: Coronation Street listed on Airbnb for the first time ever