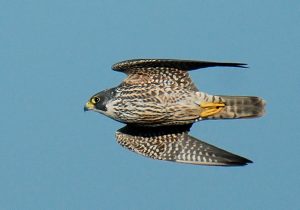 Pigeon racers have been accused of killing two Peregrine falcons.

The body of a female nesting Peregrine was found last week in a quarry at Clee Hill in Shropshire.

A male bird is also thought to have been poisoned.

Peregrines have killed at the same site for the last 11 years.

It is thought pigeons – smeared in poison – are left near the nests to lure the birds of prey to their deaths.

A spokesman for the Shropshire Peregrine Group said:

“There have been a number of examples in recent years, including at this location, of peregrines being illegally poisoned at quarries where they have been nesting.

“Typically, when a peregrine is poisoned in a quarry there is a link to the pigeon racing community.

“Poisoned baits left in the open, in public spaces, are not only lethal for wildlife but could have serious consequences for any person or pet that comes into contact with them.”

“The birds are very much appreciated by the majority of the community, who enjoy seeing them around and I have people asking how they are.

“They’re beautiful birds which have a role in the environment and they’re just beautiful to watch when they’re flying around, as any bird is if you’re a birdwatcher.

“There’s no game shooting around here – we’re not that sort of region.

“Whoever it is needs to stop it, because there’s just no excuse.”

The Peregrine Falcon is the world’s fastest bird.

It’s estimated it can reach speeds of 200 mph.