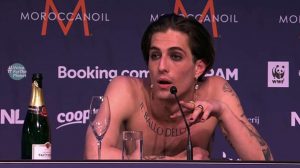 The lead singer of Eurovision Song winners Maneskin did not take drugs during the final, an inquiry has found.

David was seen to lower his head and bend down over a table in the show’s green room.

The Italian band – who won with the song Zitti E Buoni – strongly denied he was taking drugs.

“Following allegations of drug use in the green room of the Eurovision Song Contest Grand Final on Saturday 22 May, the European Broadcasting Union (EBU), as requested by the Italian delegation, has conducted a thorough review of the facts, including checking all available footage.

“No drug use took place in the green room and we consider the matter closed.”

The EBU said it was “alarmed inaccurate speculation leading to fake news has overshadowed the spirit and the outcome of the event and unfairly affected the band”.