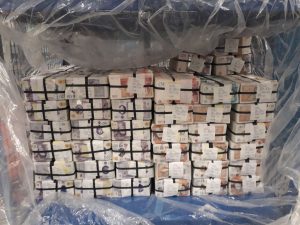 More than £5 million in “dirty cash” was found hidden under beds and cupboards in a money launderer’s flat.

The find by the Metropolitan police was the largest single cash seizure by the force.

It was piled high at the flat in Fulham, south west London, because the gang didn’t know to do with the vast sum.

The moment accumulated because lockdown restrictions prevented it being moved out of the UK.

The haul was found when suspect Ruslan Shamsutdinov, 36, struggled to lift bags into his car parked out the flat.

They cash was linked to Sergejs Auzins, 46, a Russian middleman working for gun and drugs syndicates across London.

Detective Superintendent Jason Prins said his team accidentally stumbled across the Fulham flat as they were investigating firearms and drugs.

“In the flat, there was money everywhere you went — under the beds, in cupboards and on the floor.

“They couldn’t even hide it.

“It was a money laundering hub for a number of crime groups.”

More money was found at Shamsutdinov’s home in Hackney.

Detectives later saw Serwan Ahmadi, 35, handing over a bag to a suspect in north London.

Hours later he was arrested in Edmonton, along with £59,980.

Further arrests followed and more money was recovered – bringing the total to £5.4 million

“Covid had really exacerbated their problem of how to get rid of money.”

They will be sentenced on Friday.

“We still haven’t established who actually owns it.

“Organised crime is motivated by money and is one of the biggest causes of violence on our streets.

“Tackling this violence is our main priority.”

The seized money will go towards the police fighting crime