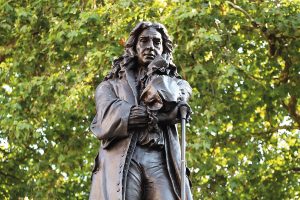 The toppled statue of slave trader Edward Colston is to go on public display.

The bronze was dragged from its plinth in Bristol and pulled to the quayside before being thrown into the water.

Edward Colston was a 17th Century slave trader from the sea-port city.

The memorial’ demise came in the backlash when George Floyd died in America after being pinned down by a police officer.

Bristol City Council recovered the stature and firstly put it into storage.

Now, until its fate is decided by the public, it will go on temporary display at the M Shed in the city.

“June 7th, 2020 is undoubtedly a significant day in Bristol’s history and had a profound impact not just in our city but also across the country and around the world.

“The Colston statue: What next? display at M Shed is a temporary exhibition which aims to start a conversation about our history.

“The We Are Bristol History Commission will be leading that conversation with citizens over the coming months.

“The future of the statue must be decided by the people of Bristol and so I urge everyone to take the opportunity to share their views and help inform future decisions by taking part in the survey.”

“This is an opportunity for everyone to have your say on how we move forward together.

“The display is not a comprehensive exhibition about Colston or transatlantic slavery in Bristol, but it is intended to be a departure point for continuing conversations about our shared history.”

The paint sprayed onto the statue during its toppling has been “stabilised”.

A bicycle tyre that came up with the stature from the water will also be included in the show.

“The aim of our conservation work was to stabilise the statue and prevent deterioration from the water and silt it had been exposed to.

“This will prepare the statue for whatever its future may be.

“M Shed’s role is to reflect the history and contemporary issues relating to Bristol, telling the stories that matter to the people of Bristol.

“Therefore, it is a very suitable location for this short-term display of the statue. It will enable visitors to take stock and make their own minds up concerning the future of the statue.

“The display and survey will also be online, helping to reach people across the city and beyond.”

Joel Glazer: We have given impression we don't care about Manchester United