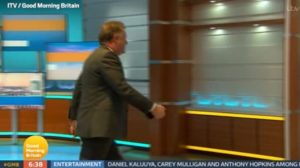 Piers Morgan claims he has been asked to return to ITV to present Good Morning Britain.

The 56-year-old walked off set in March after an on-air falling out with weather presenter Alex Berresford.

Since then the viewing figures for GMB have plummeted.

Morgan said he has been approached through a third party to make a comeback.

He told The Sun:

“I have had some quite random third-party feelers put out to see if I would consider a return to the show.

“I don’t want to say on the record who, but a pretty close third-party.

“As the Americans say, they reached out — there have been approaches to test the water in the wake of their obvious ratings issues.

“It makes me sad to see all the hard work we did to beat the BBC in viewing numbers evaporate so fast.

“It’s their problem to work out … but never say never.”

Morgan stormed off after saying he didn’t believe what Meghan Markle had said during her interview with Oprah Winfrey.

Why writer KIT HESKETH-HARVEY is dreaming of Essaouira in Morocco