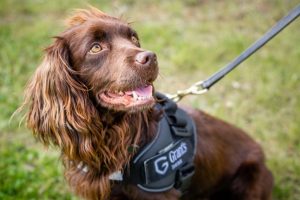 A one-year-old cocker spaniel is being used to sniff out imperfections in wooden barrels before they are used to age whisky.

Rocco has been specially trained to smell any problems in the casks.

And should he find any shortcomings his report goes straight to Grant’s Whisky boss – Mr Woof.

“Wood is a natural material, and the distilling of whisky is an organic process, so our job for Grant’s Whisky is to make sure that everything is perfect as the whisky ages in the oak casks.

“The sense of smell of a dog like Rocco is 40 times stronger than a human’s, and we’ve specially selected and trained Rocco to pick up the scent of anything that’s not quite right as the whisky matures.” 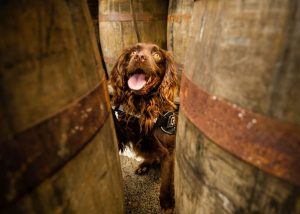 “A dog like Rocco has such a powerful natural sense of smell that my job was to help him focus on identifying specific scents in the wood, and then communicating what he’s found to the Grant’s team.”

Rocco is being cared for by Grant’s team leader Lianne Noble.

Ms Noble said: “The atmosphere lifts wherever Rocco is working, and people can’t help but smile in his presence.

“He’s a working dog rather than a workplace pet, so we have guidelines in place to make sure he doesn’t get disturbed when he’s taking a break between shifts, but the boost in morale has been a joy to see.”