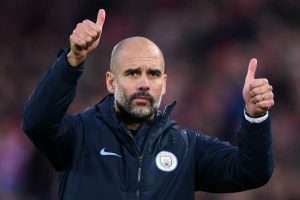 Manchester City have won the Premier League for the third time in the last four seasons.

They took the honours – despite not having to kick a ball – with three games to spare.

A 2-1 defeat for neighbours Manchester United at the hands of Leicester City ensured the trophy went to the Etihad.

“This has been a season and a Premier League title like no other.

“This was the hardest one.

“We will always remember this season for the way that we won.

“I am so proud to be the manager here and of this group of players.

“They are so special.

“To come through this season – with all the restrictions and difficulties we’ve faced – and show the consistency we have is remarkable.

“Every single day, they are there, fighting for success, trying always to be better.

“They have been so, so resilient.

“That is equally true of each and every member of our backroom staff, who have worked tirelessly behind the scenes to ensure that our players are fully equipped to take on the unexpected challenges and new routines throughout such a turbulent year.”

The team will lift the trophy at the Etihad Stadium on May 23rd when they face Everton on the final day of the season.